What Being Robbed Taught Me

On November 8, 2015 I had all my photography equipment and a bunch of my exploring gear stolen from my truck at the Banff Mountain Film Festival in Banff National Park, AB. Turns out, that day was a blessing in disguise. The following is the story of what happened and what I learned from being robbed. 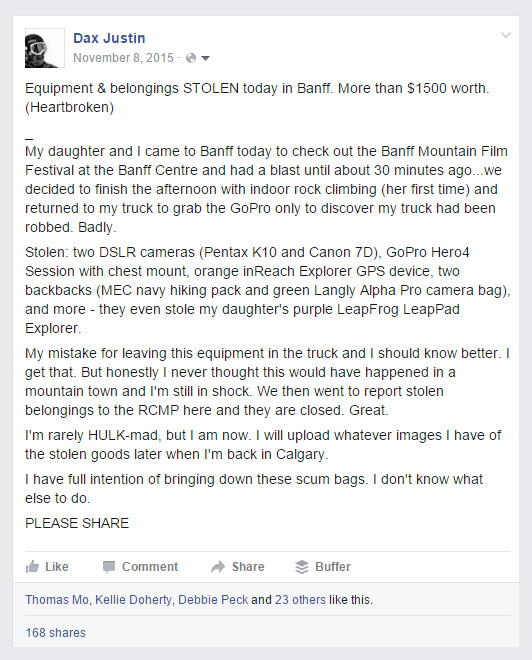 So just to update everyone – the gear has still not been recovered. I kept an eye on Kijiji and the Banff Center security was notified and I had the RCMP involved. That being said, the thieves could have taken the camera equipment anywhere to sell it, but that is not what this post is about. This post is about how an act of robbery could actually turn out being a blessing in disguise. First of all, I’ve had many people ask me about some of the action associated with my social media postings after the theft. They are as follows:

So, what did I learn from all this?

1. Compassion is King. (and always will be)

I hear people say that negative news travels further than positive news. Which may be true in some cases, but compassion can TRANSCEND further into the feelings of people, and that can be way more powerful than a negative story. This is also a two-way street; people had compassion for me and my daughter because our stuff was stolen, but what about the thief? Honestly, after a day or two I gained compassion for whoever broke into my truck and stole everything. Why? Because he or she is in a worse place than I am. Who thinks robbery is cool? People who are desperate, or dumb people. Either way – they cannot bounce back harder or stronger from this… I can.

2. Don’t underestimate the power of your network.

You know, I’ve been on Twitter since 2009, Instagram since 2014, and have been on Facebook forever (but have only taken it seriously since 2014) and I always knew I had an awesome tribe. I love my friends, I love people who comment and interact with my feeds and social media has forever played a HUGE role in my career and personal life. BUT my mind was blown that day and the PURE LOVE I felt from everyone melted my heart – even people I rarely interact with or who I just met shared and offered all kinds of help. Some friends even set up a GoFundMe page and others just reached out and offered me money to help me get some new equipment. I was overwhelmed by the amount of support I felt from my friends, followers, and the community for the coming weeks. I love you all, you have no idea.

Seriously, they do. After I posted my outreach post across my social media networks, the love and support from people was overwhelming enough – that night the kind folks at GoPro reached out to me and offered to send me all new GoPro equipment. (photo below) LIKE, WHAT! I also posted the image below on my Facebook which got more ‘Likes” than any other photo I have ever posted. (500+ Likes)

Then the VERY NEXT DAY Instagram made me a Suggested User, becoming a top-choice account as chosen by Instagram, drastically increasing my following on Instagram. Then the next day Canadian Geographic magazine reached out to me to publish one of my photos in their JAN/FEB issue. Then a friend of mine on Twitter who I’ve tweeted back and forth with named Joey Bergeron (@joeybergeron) sent me a note and said that he was willing to send me his Canon 30D DSLR camera plus a couple lenses and everything I’d need to get back on my feet. Like, wow. I got emotional like a roller coaster for all of those days but Joey, my man, you really struck a chord with me. I love you. Furthermore someone at Canon Canada saw my post and I’m now in touch with them. (more to come on that hopefully)

4. You have a choice when you get robbed: You can pout, or forge forward.

Unfortunately, robbery happens. Sometimes we can avoid it, and sometimes we can’t. I say that this theft was a blessing because at the moment after getting into my truck with my daughter and realizing we had been robbed, I got upset. However, I knew that being robbed was something I could not control. This instance, was out of my control. So I did not allow myself to become clouded with negativity. That day my daughter and I planned on going indoor rock climbing (her first time climbing indoors) after the film festival, and I looked into the back seat and said to her, “Sweetheart, it’s lame that we got robbed. But there is nothing we can do about it right now other than report it. You know, Christmas is coming up and I’m sure if you ask Santa nicely he will bring you a new LeapPad, but this theft is not going to ruin our day or our spirits – we ARE going back inside and we are going rock climbing.” And we did. And it was amazing. So amazing that for those moments while we climbed, we both forgot about the robbery incident. Forge forward, and come back stronger.

5. Life is about being alive, not things.

It always sucks having your stuff stolen, but at the end of the day – it’s just stuff. Stuff that I LOVED DEEPLY, but I am thankful the robbery didn’t happen while my daughter and I were in the car, and that nobody got hurt. It could have been a lot worse in more than one way. I mean, if I would have witnessed the robbery I’d be in jail right now for like, murder. Or like however many broken legs.

6. Don’t underestimate the other guys greed.

As quoted from Frank Lopez in Scarface.

Even if your vehicle is locked, even if you have a security system – if you want to keep it, always have it on you, in a locker, or within sight.

Have you ever been robbed before or been the victim of a theft? How did you bounce back?