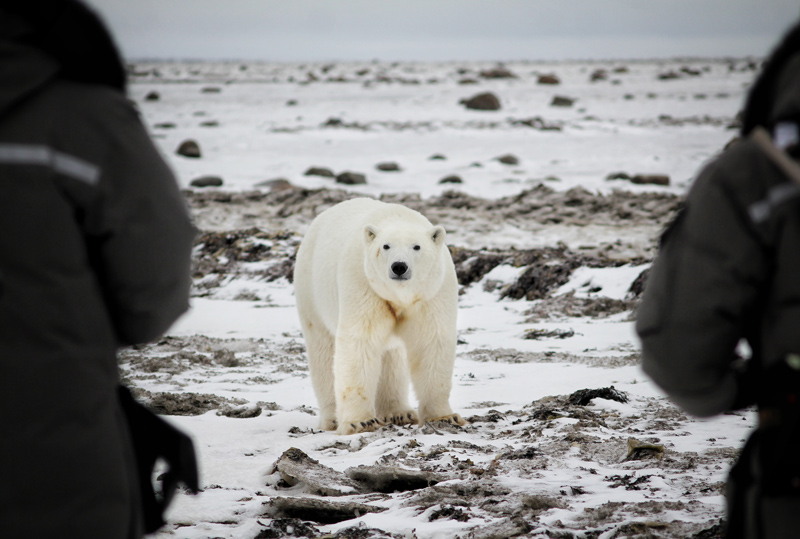 In late October, 2017 I embarked on my greatest adventure yet in the Polar Bear Capital of the World: Churchill, Manitoba. On assignment with Canadian Geographic, I was told I’d be seeing polar bears with Churchill Wild on their Great Ice Bear Adventure. What I didn’t clue into was that I’d be on the FRONT LINES SHARING THE SAME ICE AS THE POLAR BEARS!

First of all – this trip got REAL, REAL FAST. We approached Churchill Wild’s Dymond Lake Ecolodge, a 20-minute plane ride from Churchill, Manitoba. As we began to land I looked out of the plane’s window and SAW TWO POLAR BEARS LAYING DOWN not far from the gravel runway. We were to land then proceed on-foot to the lodge, which is about a 10-minute walk from the runway…

Not five minutes into the walk towards the lodge and suddenly we saw two polar bears sparring to our left. They were quite a distance away and behind trees but this display stopped us in our tracks. This wasn’t the time to stop and unload equipment so it turns out this was a moment shared only between the few of us, not captured in any sort of digital form. To witness two bears sparring and kicking up snow was a spectacle that will already have me planning to go back. And the adventure hadn’t even started yet! 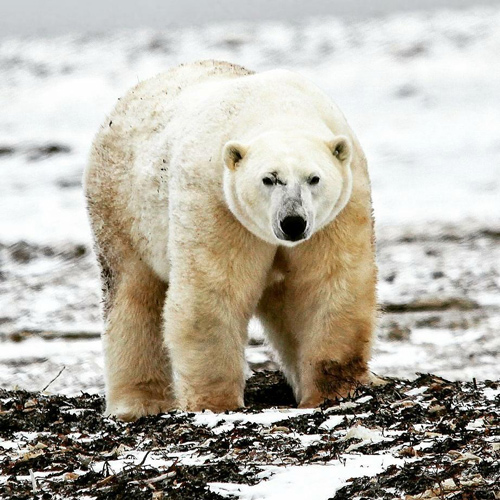 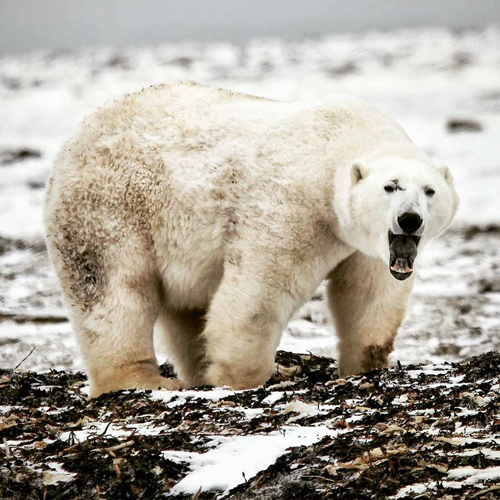 Meet Scarbrow. Scarbrow is a male polar bear with a long 10-year history with the people of Churchill, Manitoba.

On the day we flew into the remote arctic lodge I had the chance to meet him up close & personal. Scarbrow is a badass Canadian celebrity and is kind of a big deal. He’s won the hearts of thousands. He has even been in the slammer a couple times… You don’t get anywhere in life without tipping over a few garbage cans! On the inside, Scarbrow is just like every one of us, taking our best shots at life while we’re here. Nobody is closer to this bear than the Director of Operations at Churchill Wild, Nolan Booth. “He’s no different than a big furry pet and I love him like crazy! He’s been visiting us for about a decade now and I’m hoping we can continue to see him beyond this season.” – @nolanbooth

Usually after a decade or so the mature polar bears will move onto a quieter life further into the white abyss, away from humans. They become less curious about people and the man-made places, and just want to be completely in their element out on the ice hunting seals and sleeping. Here’s to you, Scarbrow — you may not know it but you are a cherished animal on this planet. ?

When you’re on the Tundra with polar bears, there’s this magical unspoken communication that happens between you and the animal.

Few people will write about this unique occurrence in length because it’s hard to imagine and explain, but I will do my best here. Everyone’s asked me one question: “Did you feel safe out there?” Honestly, we all felt comfortable the instant after our first encounter as a group with a polar bear. Sometimes we gently approached bears, other times they cautiously approached us. We saw several different bears over the week and in EVERY instance there’s this instantly noticeable transfer of energy between you and the bear. You’re the most aware you’ve ever felt, yet totally calm. They’re walking towards us, slow and calm. Catching scents and sniffing the ground and air as they inch closer. The exchange paints an imaginary ‘Do Not Cross’ line when you’ve both reached a level of comfort in distance. Using mostly verbal communication, our guides would raise voices and bang rocks together and somehow, the bear knew in every case, when we met our comfort level. The bears would back off when they heard a sharp or loud sound out-of-place in their environment. I can only explain this nuance as a profound energetic transfer of comfort and respect. The bears were all equally as interested and curious as we were and this deeply felt exchange and this understanding is what can help keep them safe out there.

I’ve been struck-through-the-heart by these animals. Don’t get me wrong, they are an apex predator, but after you spend time with these giants you’ll see and feel their true souls. They remind me the most of dogs, and in fact polar bears aren’t that far from the dog family! They all have their own personalities and character, they play, they listen, they observe, they LOVE + SURVIVE – and they deserve to be loved back. That’s what the people of Churchill Wild dedicate themselves to. You won’t just learn about these creatures you’ll meet them on the front lines, LITERALLY.

Experience polar bears without the crowds — it’s the only way to go.

From this I have garnered a deep admiration and respect for polar bears that I wouldn’t trade for the world. (That’s why this experience exists!) Please take this advice too: Put this on your bucket list then do it..

What: The ‘Great Ice Bear Adventure‘ facilitated by the team at Churchill Wild.

How: Connect with Nolan and the Team at Churchill Wild: