I’ve always wondered what the Earth looks like below the surface. After my exploration of Rat’s Nest Cave with Canmore Cave Tours, I’m excited to share the photographs and stories with you. In the cave you’re immersed in a living, sweating, self-sustaining eco-system. All without a lick of sunlight. It was thrilling, educational, and visceral.

I want to take you deep inside Earth’s Womb and show you why this is a Signature Canadian Experience as designated by Destination Canada.

A few weeks ago my latest assignment had me descending hundreds of feet into the Earth, as part of a 3-person team including my renegade manager Larissa Roque and our guide, Max. Our idea was to rappel into the fault line that created Lake Minnewanka and explore this subterranean realm, facilitated by the cavers at Canmore Cave Tours. Located just an hour and ten minutes away from Calgary near Canmore, Alberta is the Rat’s Nest Cave: a Provincial Historic Resource situated on the south-facing slope of Grotto Mountain. YO, let me be clear – I’m uneasy and scared sh*tless of the thought of crawling into tiny cracks and squeezing through tunnels hundreds of feet below the Earth. Being wedged between rocks – Are you nuts or what? But something happened down there. Time stopped; and we descended into Earth’s womb.

The first memorable instance from this journey came immediately upon entering the cave –  I looked down into a deep dark hole, fully harnessed at this stage and realized: there’s no one else down there whatsoever. This is the back country. I felt slightly nervous not knowing what to expect. Before the initial descent, our guide Max pointed out a drawing just inside the entrance of the cave. A reddish-colored marking at eye-level held my attention for the next few moments…the drawing was of a person holding a wheel. After historical research it was discovered the pictograph was of a Shaman – a protector of a spiritual place. It was a belief that this cave was the entrance to the “heart of the land.”

We entered the first room, appropriately named The Bone Yard – a room of skeletal remains of deer and paleontological specimens of birds, snakes, fish and several amphibians.  An accumulation of bones populated this room from a variety of sources such as animals falling into the cave, rats bringing in bones, but there’s also evidence of First Nations cultures visiting the cave as artifact discoveries have been made of arrowheads as well as bones shaped out with carving tools. The cave also contains the remains of over 30 mammalian species. The many and varied paleontological resources of the cave exist alongside the diversity of insects, arachnids and worms that presently inhabit the site. The human presence in the cave has been established by the discovery of prehistoric tools found at the site that date back roughly 3000 years ago. These are the reasons why this cave is a provincial protected resource. It’s safe to say that set the tone for our journey.

When you enter the cave, you enter a whole other world. It didn’t feel like we were under the surface – it felt like another planet entirely – an alien planet that was ALIVE. A rare place that thrives without the assistance of the one thing we all think every living thing needs to survive – the Sun. After we left The Bone Yard we rappelled down about 60 feet into another area of the cave, exploring throughout on mostly our hands and knees, or just flat-out on our back and stomach.

Then we came up to a newly-excavated, unnamed squeeze not yet on the map. Traditionally, a professional “mapper” carries out mapping of the area, which is conducted over time. Once the area is fully mapped, the mapper will give the newly-discovered area a name, but I suggested to Max we name that squeeze The Slayer (if you know anything about me, you’ll get the reference). I think it was meant to be – this was the tightest squeeze to shimmy through up to that point and the day before we explored Rat’s Nest also happened to be International Day of Slayer. And to reiterate – I WAS AFRAID OF GETTING STUCK. Who wouldn’t be? But it’s extremely rare. Even if a squeeze is tight, it’s easily maneuverable and this fear of mine disappeared almost instantly down there.

In my initial research of Rat’s Nest Cave I read about one of the cave’s main features: The Laundry Chute. Accurately named, The Laundry Chute is a vertical crawl down, then a sharp horizontal crawl, or shimmy, that requires you to shift your body down a tight tunnel that takes on an “L” shape. It takes approximately 2 minutes to complete this tight squeeze and it was worth every second. I can say I was looking forward to this squeeze the most and it didn’t disappoint.

We made our way through chutes and squeezes to a large room called the Grand Gallery. Being the largest room in the cave, you’ll hear the sounds of Earth… I remember staring straight up at the long fault line that leads all the way to Lake Minnewanka thinking, “These two chunks of the Earth formed the cave I’m standing in, shaped by pressure and time.” Max then told us that this fault line leads all the way to Lake Minnewanka in Banff National Park, and the water that formed this cave is now the water in Lake Minnewanka.

For the first time in my life I saw alien-like formations. I don’t just mean these things “look” like fossils – they look and feel extraterrestrial. You’re surrounded by speleological features called stalactites and stalagmites; a natural phenomena basically made up of fossilized water and gas, shaped by moisture seeping through the cave’s ceiling and dripping on a vertical line. These formations can take thousands of years to grow, depending on how much moisture comes through the cave’s wall. I don’t believe I’ve ever been surrounded by such an ambient, otherworldly place. To say the cave isn’t alive is a lie. The mountain SWEATS all around you…it’s its own living ecosystem. At one point Larissa and I were both photographing the some of these formations, affectionately referred to as Pig’s Ears and as she lay on her back taking photos, a drop of water from one of these stalactites landed in her eye. It sounds like a mundane thing to bring up, but when you’re down there, all your senses come to life and everything has meaning.

“I watched that drop come down into my eye in slow motion,” Larissa said. “People tend to blink when something’s coming at their eye, but I literally watched it happen. It didn’t feel as it should have – intrusive – and it wasn’t something I wanted to wipe off my face immediately after either. I welcomed it. It was as if that cave wanted to be part of me as much as I wanted to be part of it and with pin-point accuracy, the cave entered my body through my eye. It runs through my veins now, it’s part of me. It was one of the most peaceful moments of true connection I’ve experienced in my life.” – Larissa Roque (@larissarpr) TWEET THIS 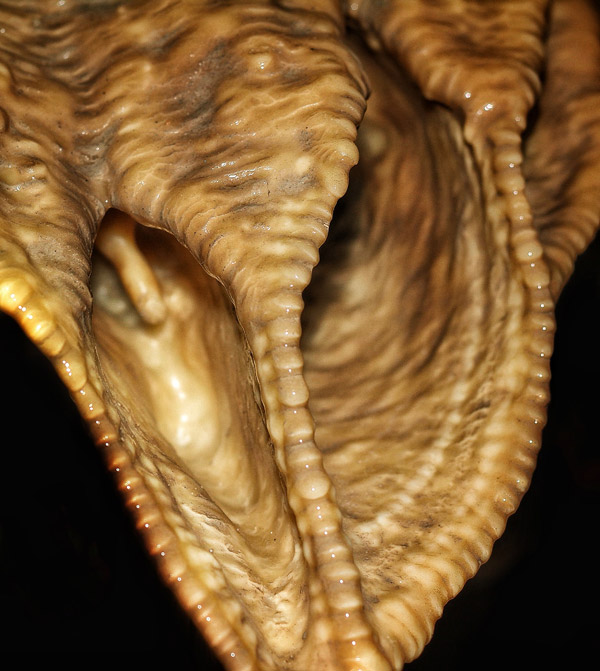 Alien Time Machine: This photo of interconnected “curtains” was captured within the Grotto of the cave, having grown for roughly 750,000 years. The cavers call it a ‘Pig’s Ear‘ and it develops whenever the glaciers above the cave retreat, and the now unfrozen water percolates through the rock above the cave, dissolving minerals from the surface and depositing them anew when the water reaches the cave below.

When I gently ran my fingers along this specimen, it felt like a fossilized life form. It looked intangible, yet existed right before my eyes. Cold, hard, smooth and extraterrestrial. It FELT alive. And so did I. 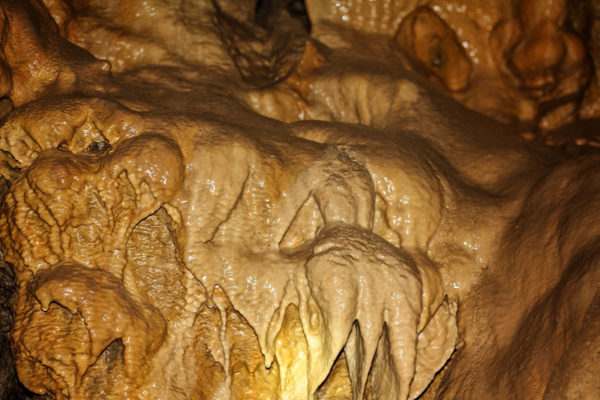 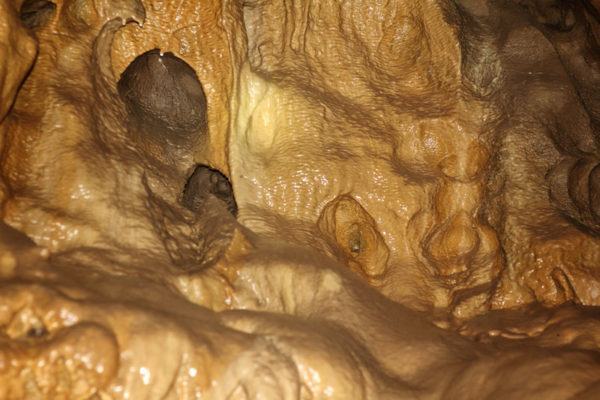 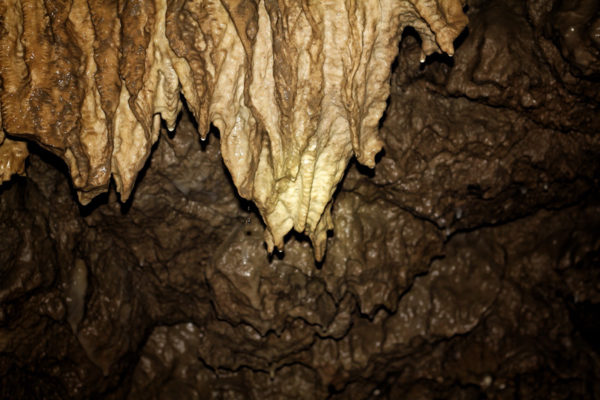 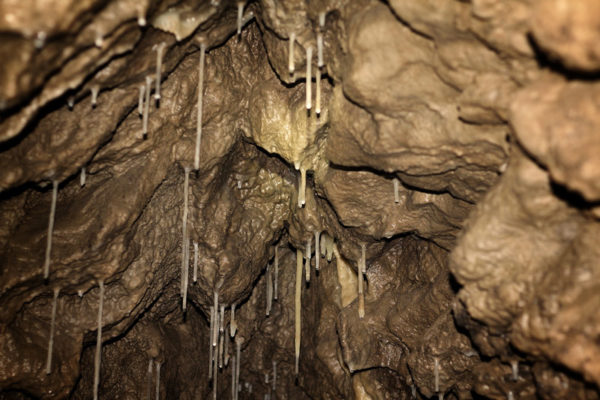 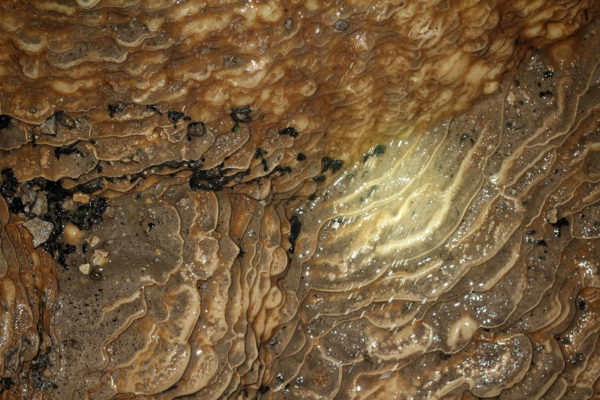 At the deepest point in the exploration of Rat’s Nest at -54 meters, we decided to kill our headlamps inside The Grotto Pool, the lowest room on the tour (FYI: The lowest point in the cave is -165 meters). It’s a strange feeling to wave your hands in front of your face and only experience pure blackness. You. See. Nothing. You will FEEL the darkness. Lights off – minds clear. With nothing to see with your eyes, my thoughts and feelings turned inward. I discovered I wasn’t claustrophobic. You know the first time I met Adam, Owner & Facilitator at Canmore Cave Tours, he said, “This is not a ‘tour.’ It’s deeper than that…we’re in the business of showing people a side of themselves they may have not known they had. You’ll discover something about yourself you may have never known.” 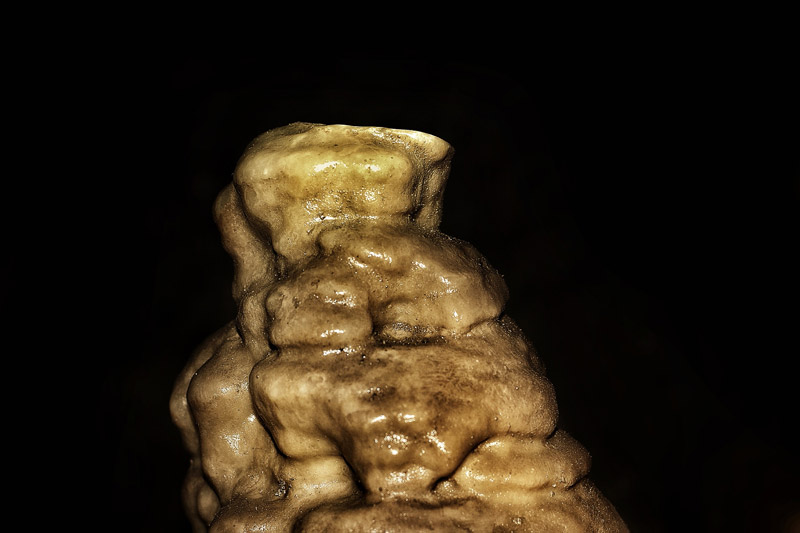 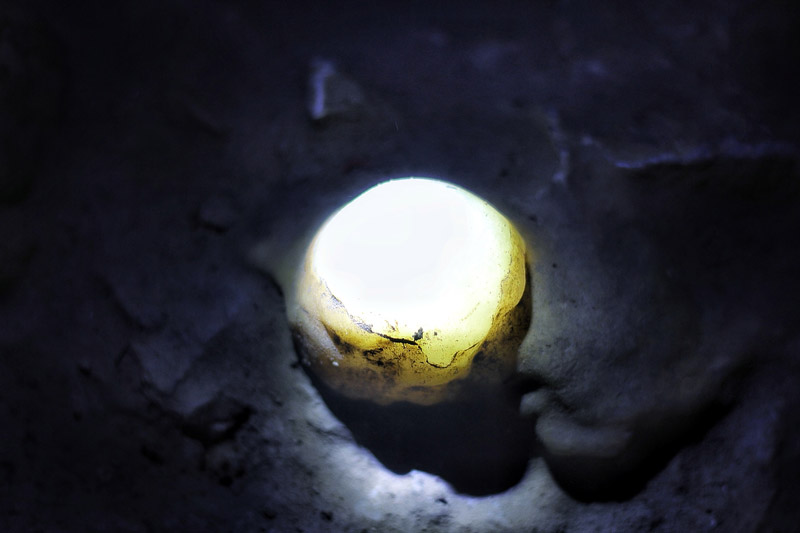 “Like studying layers in glaciers or the lines of tree rings, studying those layers in the cave formations tells you about the past. Oxygen isotopes trapped within (giving information of temperature and glaciation), along with proportions of greenhouse gases (giving us information about climate), and trapped organics (telling us about the ecology outside), all work together to paint a picture of the world long before homo sapiens even walked the planet.” 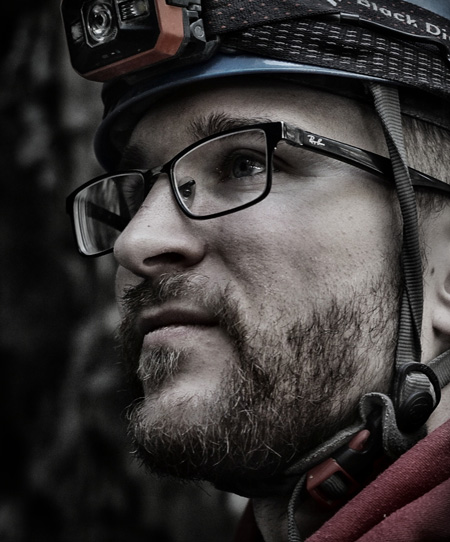 We discovered the ultimate sense of solitude as we explored 4 kilometers of a subterranean world. Larissa and I learned how paleoclimatology (the study of time through climate) gives us windows into past worlds and after spending roughly 5 hours underground, being in this cave felt like entering a living time machine. You won’t notice the time fly by while you’re down there, it felt like time stopped. This is a visceral and thrilling experience and I now understand why it’s a Signature Canadian Experience as designated by Destination Canada. 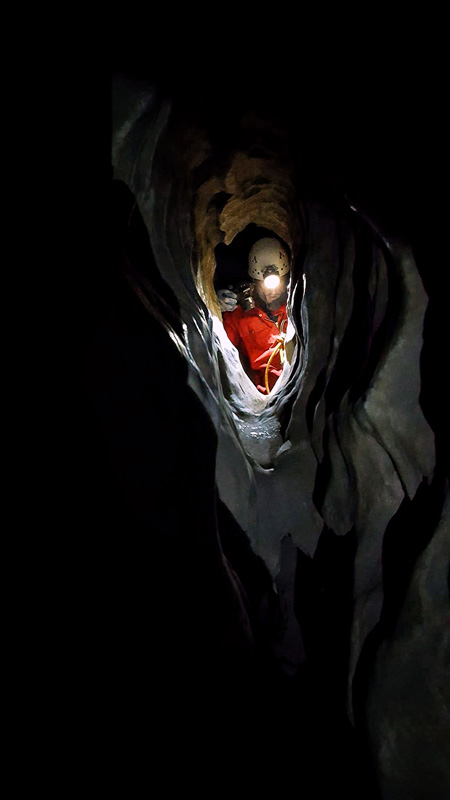 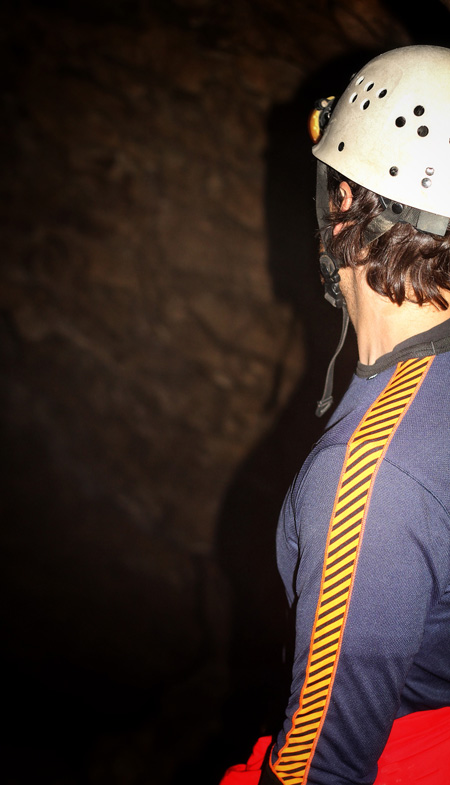 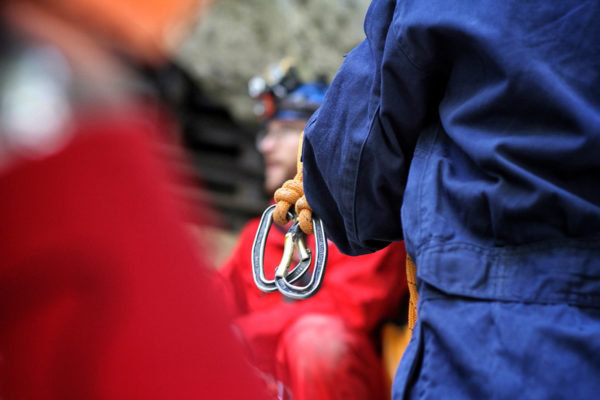 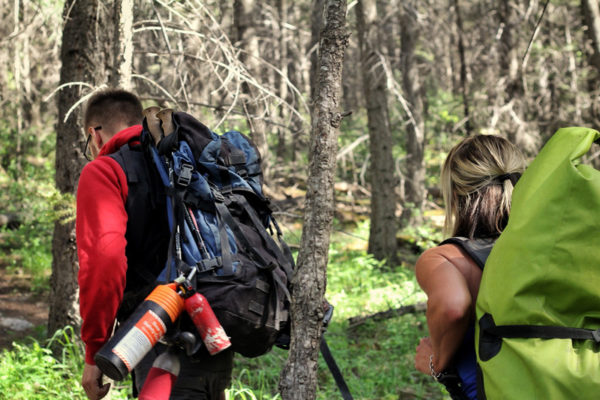 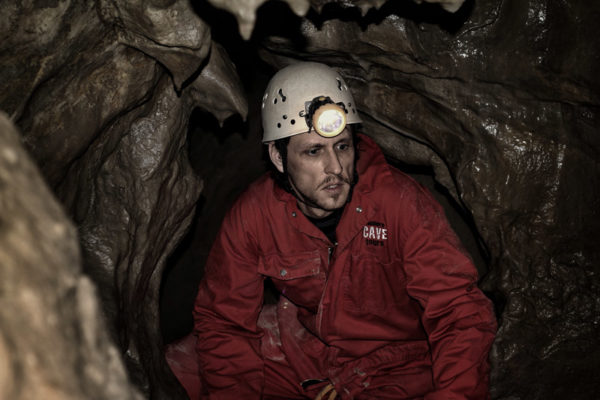 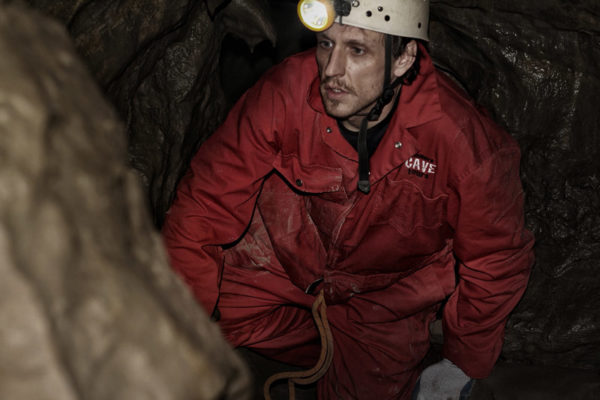 As I write this I’m staring down at hundreds-of-thousands-of-years-old sediment underneath my fingernails and without being on a Private Tour – SOLITUDE – Canmore Cave Tour’s new experience offering – I don’t feel we would have been able to fully absorb the magnitude of this experience. Without being with a group of people, you’ll have time to enjoy every inch of the cave while exploring at your own pace.

What: A Signature Canadian Experience as designated by Destination Canada.

Where: Rat’s Nest Cave, designated a Provincial Historic Site in 1987, situated on the south-facing slope of Grotto Mountain near Canmore, AB, Canada. Access to the cave is restricted in order to protect the environment inside and entry is facilitated by Canmore Cave Tours.

How: Connect with the Team at Canmore Cave Tours: